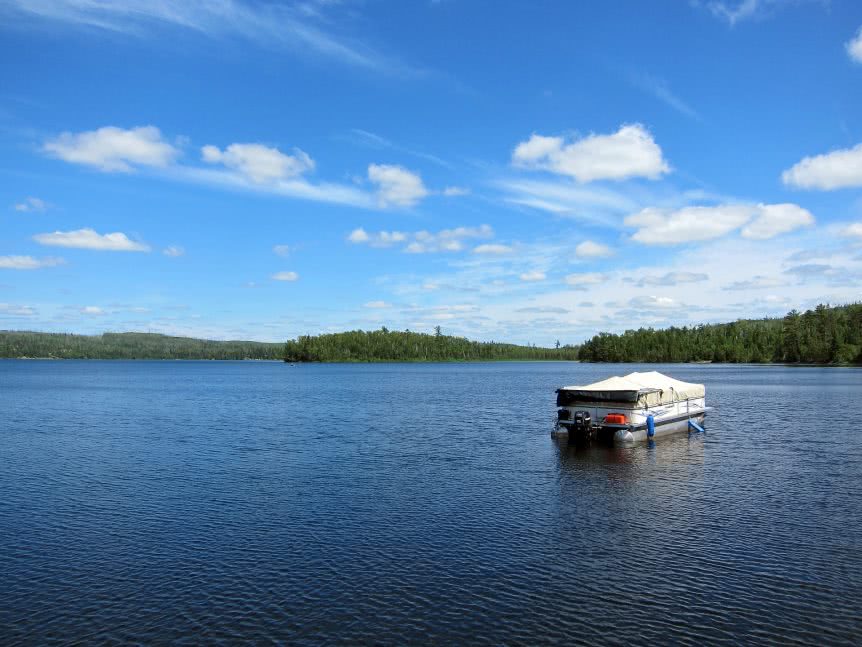 Over the years Pontoon boats have evolved and become increasingly more advanced. Different models and styles of pontoon boats are becoming available on the market every day. These new styles and models provide great versatility, ensuring that there is a perfect boat for every situation.

One evolution in the Pontoon world which may have caught your eye is the Tritoon. This is essentially a Pontoon with three toons rather than two. Sounds cool huh? Is a Tritoon better than a Pontoon?

You’re probably stuck between the purchase of a Tritoon and a Pontoon. This buyer’s guide should clear things up and make the choice a whole lot easier. This article will compare the two thoroughly, identifying their differences and highlighting situations in which they excel in. This is the ultimate Tritoon vs Pontoon Guide.

Firstly, we’ll be identifying the difference between a Tritoon and a Pontoon.

A pontoon is a boat supported by two tubes filled with air. These tubes allow the boat to float on the surface of the water.

Pontoons vary greatly in size, ranging from around 16ft long to 27ft. This is just the average range, there are also exceptionally small pontoon boats. This includes Mini, Narrow, and Compact pontoons which are better suited for specialized conditions.

The average pontoon boat will have no less than a 25 hp motor and will carry between 8 and 15 people. Everything from the motor power to the amount of people you can carry will depend on the size of the boat.

Pontoon boat motors tend to be put under slightly more stress than a regular monohulled boat due to it’s shape. The more people which you will have on your boat, the more powerful you want your motor to be. This is because the extra weight will make the boat heavier, and thus a stronger engine will be needed to push the boat along.

Another thing you’ll need to consider when choosing the power of your engine is what you intend to do with it. For example, if you intend on participating in water-skiing then you’ll want to be able to hit the 15 mph to 36 mph. A boat which goes under or way over this wouldn’t be appropriate. If you intend on using your boat for water-sports then you’ll generally want a boat capable of speed around 25 mph, this tends to be the sweet-spot. Check out this guide on average pontoon boats speed which also includes the speeds needed for all sorts of activities.

One of the boats I own is a Tritoon 21’ which has a 90hp engine and is capable of reaching speeds of 27mph. This boat is perfect for the activities which I take part in which includes towable tubing, water-skiing and more.

A brand-new pontoon boat costs between the range of $15,000 – $60,000. The price of a used pontoon is about $20,000. Though this varies depending on the specifications of the boat (Mainly the size and engine type).

As mentioned previously, a triton is a boat like a pontoon however instead of having two air filled tubes, it has three. Generally, they’re around 23-30 feet long and accommodate for 15-25 passengers.

Tritoons tend to be significantly larger than pontoons. This makes them attractive to those who intend on carrying lots of passengers. Though, for those who don’t really need the extra space, it may be unnecessary.

The average price of a triton is about $35,000, though this varies depending on the specifications of the boat. Luxury models will go way over this price. This is significantly more than a pontoon boat, the price alone is enough to put people of tritoons, though for some it’s worth it.

In the ocean, or any body of water with rougher conditions (Less calm), the triton excels since they have three toons and a generally stronger engine. The combination of both allows for the triton to slice through the choppy waters much more effectively than a pontoon. This results in a lot less bouncing and rocking, allowing for a much more comfortable and smooth trip.

If the lake that you’re boating on suffers from over-crowding, or there just happens to be a lot of people on the lake that day, the waters can become choppy. This will cause your boat to rock around a bit, making for an uncomfortable ride. A pontoon will feel the effect of this a lot worse than a sturdier tritoon.

Keep in mind, that due to their bulky-ness and the size of a tritoon, they generally have a lot worse handling. This makes them a lot tougher to navigate on smaller bodies of water with more cramped spaces. A tritoon will also be a lot more difficult to dock and make tight corners on. This is something which you may get better at over-time as a tritoon owner. 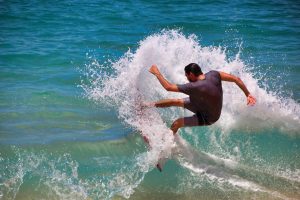 As mentioned previously, a tritoon may be a good choice for those who enjoy participating in watersports. This is because due to having a more powerful motor, you’ll experience increased speeds compared to a pontoon. This makes it great for all sorts of watersport activities.

Though, saying this, it’s also important to remember that the size of a tritoon may negatively affect your watersport experience. Due to it’s increased size compared to a pontoon, the steering and handling suffer significantly. This could make watersports which require maneuverability, less enjoyable. For example, zig zagging when skiing or won’t be as smooth as it is in a pontoon.

If you plan on water-sports and are now thinking that a tritoon is the go-to, you may be mistaken. Though they’re generally faster and therefore provide a great water-sport experience, they’re not always necessary. The traditional pontoon boat can also do the job just fine if you purchase one with a powerful enough motor. If you want to know more about water-sport require then check out this article on waterskiing behind a pontoon boat.

Tritoon vs Pontoon: Trailer and Storage 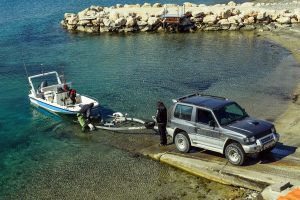 If you purchase a tritoon boat, then you’ll probably need a larger trailer. A special braking system may also be needed due to the size of the trailer otherwise you’re putting yourself, your property and other road users in danger. Whenever using a large trailer you’ll want a sufficient braking system.

Let’s not forget that if your trailering a large tritoon then you’ll require a large boat launch. It’s important that you confirm that a boat launch is large enough to accommodate for your boat before you attempt. With a smaller pontoon this usually isn’t a problem however not all tritoons will be able to fit on all boat launches.

You’ll also have to remember that the larger your boat is, the more storage space you’ll need to accommodate for it. This is especially important during the colder months in the winter when you need to put your boat into winter storage. As I had mentioned previously, it’s important for the maintenance of your boat to get it out of the water and covered so that it’s not exposed to the harsh conditions and elements. 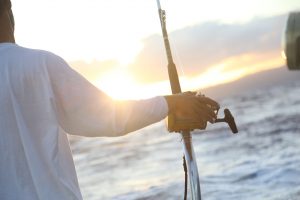 One large attraction to boats is fishing. Pontoon boats have always been known for being great for fishing. So, what about Tritoons? Which would be better for fishing, a pontoon or a tritoon?

Tritoons due to their large size, find it difficult to navigate through tights spaces. Because of this, they’re not ideal for use on small bodies of water such as lakes. Trolling motors which are small electric motors used when fishing to navigate quietly throughout to water to avoid scaring away fish, may not be appropriate on Tritoons. This is because a trolling motor most likely won’t have enough power to pull a tritoon along.

Though, not great for shallow waters; tritoons may be a good option when fishing in deeper waters such as large lakes or oceans. Due to their size, they allow for a lot of storage to be kept on board. You’ll also be able to fit more people on board for a more enjoyable fishing session!

Due to their powerful motor, you’ll also be able to navigate from one spot to another in no time. This provides you with more time which can be utilized for longer fishing sessions.

In this video by Rock The Lake, Laura Johnston interviews Scott on Tritoons and how they compare against pontoon boats.

Hear what he has to say:

So, there we have it.

I’ll briefly conclude a few facts which we’ve uncovered in this tritoon vs pontoon guide.

Tritoons are generally more expensive than pontoons, though they’re powered by more powerful, faster motors which makes them great fun for water-sports. Tritoons are also slightly larger than pontoons, and therefore are less maneuverable and difficult to steer. Because of this, tritoons aren’t very good in small and shallow waters such as small lakes. Instead, they’re better on larger and deeper waters. Due to their smaller size, pontoons are easier to store and maintain than tritoons are.