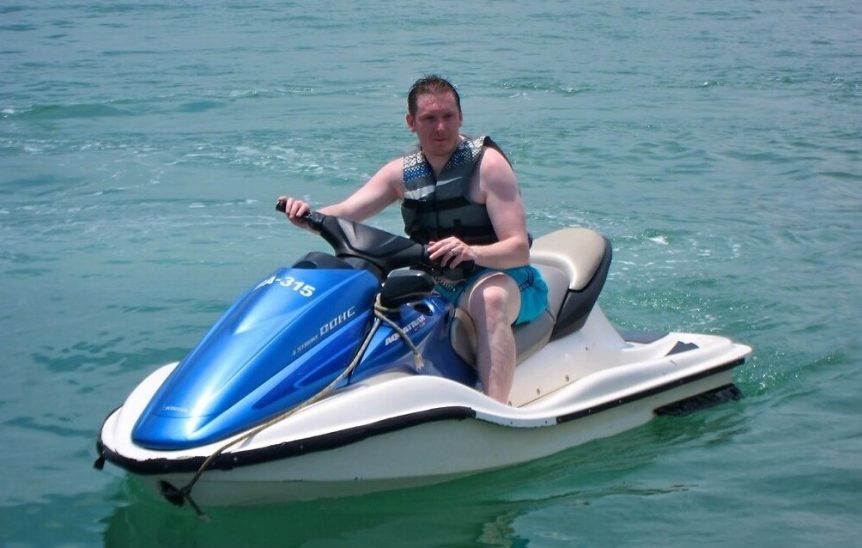 A motorbike that you can ride on the water, nothing can get cooler than this.

Personal watercraft or PWC is known by a more popular name, Jet Skis. They are the fastest and maneuverable among the watercraft out there. This is the reason why these boats are used by lifeguards and authorities.

It seems like magic, but there is an explanation for that. So, how does it work?

The Science Behind Jet Skis

We have to thank the brilliant Sir Isaac Newton for his discoveries and theories because one of them is the very foundation of these watercraft engines and how they work. The theory that we are talking about is Newton’s third law of motion. This law states that for every action, there is an equal and opposite reaction.

You can see how it works when you blow up a balloon to the fullest and let it go without tying down the mouth. You will notice how it moves around the room until it runs out of air.

The action-reaction theory is also how PWC works. It has an impeller, a small rotating part that is the very heart of this machine. When you activate its throttle, the pump will suck in the water through the grate under the craft.

The impeller will then shoot it out of a hole in the back, creating a force that will pull the jet backward. This backward action will drive the craft forward as a reaction.

Another science theory that works in jet skis is the conservation of momentum. This law of physics is responsible for propelling this machine at high speeds. The momentum of the water firing backward should be equal to the momentum of the craft and its passengers going forward. For the machine to pick up speed, it has to exit at a very high speed. For this reason, PWCs require a very powerful engine.

How Does Jet Skis Work?

If you have watched how a rocket ship takes off, you will see that it leaves behind a huge cloud that resembles fire. This is the high-pressure gas generated by the rocket to create thrust. The jet ski works similarly using the jet drive, a part of the vehicle that contains the impeller. It is responsible for propelling large amounts of water from underneath the jet ski to the rear. It also generates enough thrust to move the watercraft forward.

Here is a detailed description of the process:

Personal watercraft or Jet Skis are exciting to ride. It’s like riding on a snowmobile, only in water. Jet Skis are more than just mere toys. They have horsepower that is similar to large boats and acceleration that are like motorcycles. As such, it needs proper education and experience to operate a Jet Ski to avoid accidents.

Here is what you need to know when driving a jet ski for the first time.

Most states have implemented regulations on PWC. It means that jet skis, like boats, should be registered. And the riders are required to have completed a boating safety course before they can operate a PWC. Before you take out the PWC for the first time, make sure that you are aware of these boating regulations.

If your state does not require a boating safety course, it is still recommended that you take this course. It may have an impact on your insurance when you have completed the course. Even if you have the certificate, you should gain practical experience by starting in shallow waters.

This is very important. You and any passenger who will ride the jet ski must wear a Type III personal flotation device or a life jacket. For your comfort, you can also wear a PWC-specific trunk that has a thin neoprene liner. It will protect your legs from chafing on the jet ski seat. You can also wear a wetsuit for complete protection.

As for your footwear, you can ride the jet ski barefoot or wear a pair of water shoes or sneakers to give you enough traction when you are standing while riding. Furthermore, it will protect your feet when riding and while walking from and to your ride.

For additional comfort, we advise wearing polarized sunglasses to protect your eyes from the glare of the water. It can also protect you from insects and will make your ride comfortable as there is no windscreen on the jet ski.

When riding the Jet Ski, you should attach the emergency shut-off lanyard to your wrist before starting the engine. Some have a neoprene loop for your wrist or a clip for your personal flotation device. This lanyard is helpful when you fall off from the craft. It will pop off and will kill the engine to prevent the watercraft from getting away from you.

You need to make sure that you know the controls of the jet ski before heading out in the water. Here are some of the things to remember:

Driving and Steering the Jet Ski

When you turn on the watercraft, the majority of them start on forward so be ready to move. Others have iBR and start in neutral. They also need a little throttle if you want to steer them. Also, always keep a distance from others and be aware of who is around you. Remember, your jet ski can move faster than other boats, so you need to practice defensive driving.

Another important fact to understand about jet ski is brakes and neutral are not like what you have on other boats and cars. A jet ski has what we call a direct drive, which drives the impeller to suck and expel water to move the watercraft.

The neutral on jet skis is the bucket that controls the direction of its thrust. This spot is between reverse and forward. It is not unusual that the jet ski still moves when in neutral.

The brakes are also on the same bucket, and it does not work like the brakes in your car. It slows down the craft but what it does is to put it on the reverse so that it can slow down. This is the reason why the neutral and the reverse lever are the same. If you hit the brakes, it will eventually go into reverse.

Dealing with a Fall Off

Even experienced jet ski riders can fall off. When it happens to you, don’t panic. Instead, use these four steps for re-boarding.

Riding the jet ski can be enjoyable and learning to ride is only half the fun. Newbies need to take it slow at first and gradually increase your speed as you gain experience. Also, be smooth with the controls and acclimatize to the throttle-on steering mechanism of this watercraft and be aware of your surroundings. Follow our guide and enjoy the ride.